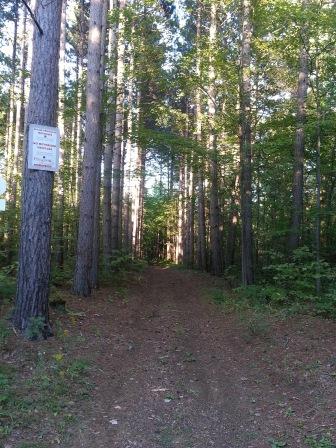 In the 1800’s, the early European settlers made logging a lucrative trade with markets in growing Canadian cities with a steady export to Europe. Forests quickly fell to the saw and the axe, cleared land was farmed and life was grand. However, without the protection of the trees, the clear cut farmland lost its thin layer of topsoil to the combined erosion of wind and water.

In the late 1930’s, an Ontario Department of Agriculture employee, Ferdinand Larose, had the vision and dedication to solve this problem. Larose and his team started a tree plantation that today stands as the second largest plantation forest in Southern Ontario.

The land was bought by the County from private landowners and manually replanted. Red Pine was the first species to be planted, followed by White Pine and White Spruce, and later early-successional deciduous species such as birch or poplar. At the peak of replanting efforts in the 1940s and 1950s, some one million trees a year were being planted.

From the outset, the forest was intended to be a harvested resource, and a multi-use public land.  Today, South Nation Conservation assists the Counties with the management of the forest.