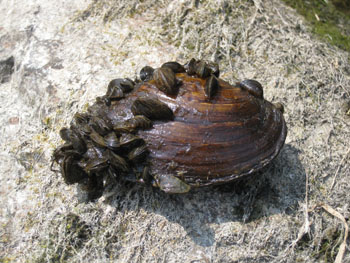 There are over 20 invasive species in the South Nation Conservation jurisdiction, including: terrestrial shrubs such as the Dog-strangling vine and Glossy Buckthorn, aquatic plants such as the Yellow Iris, fish species including the Round Goby, and insects such as the Emerald Ash Borer.

Invasive species disrupt the natural ecology of ecosystems and biodiversity; and compete with native species for food and habitat. This can have an impact on local forestry, fishing and agricultural industries.

Monitoring the distribution of invasive species and being aware of their characteristics is important for controlling the spread and identifying areas of concern.

SNC monitors and controls invasive species across its 12,000 acres of Community Lands in Eastern Ontario. SNC also participates in the Ontario Invading Species Awareness Program by raising awareness of invasive species through outreach and education.

More information and resources on local invasive species and preventing their spread can be found here.

Real time tracking of invasive species occurrences can be found on EDDMapS Ontario.

SNC reminds residents that the chemical compounds in the sap produced by both the Wild Parsnip and Giant Hogweed invasive plants are dangerous to humans. More information can be found on the Ontario Invading Species website.