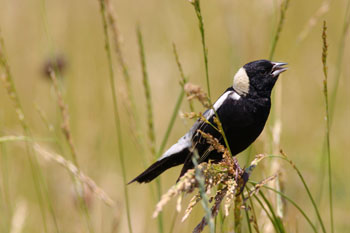 Ontario’s Endangered Species Act (2007), has the potential to impact agricultural operations. At-risk grassland birds like Bobolink and Eastern Meadowlark use hayfields for habitat during part of their life cycle, which coincides with harvest operations. In this case, a three-year exemption to the Act regarding Bobolink habitat was granted and a committee—the Bobolink Round Table (BRT)—was formed to find a practical solution allowing for both unhindered agricultural operations and Bobolink/Eastern Meadowlark recovery to proceed.

The BRT recommends to the Province the development of an Overall Benefits Exchange Pilot program. The Exchange links borrowers and lenders of Species at Risk habitat. Borrowers are housing, renewable energy, or aggregate developers issued Overall Benefit Permits under the Act, which require compensation for loss of habitat from their development activities. Lenders are voluntary landowners, including farmers, environmental organizations, or municipalities that have existing suitable habitat or lands that can be developed as habitat.

SNC owns approximately 400 acres of non-forested land which is currently being assessed for suitability as Bobolink and Eastern Meadowlark habitat. If the land is determined to be suitable habitat, it will be placed in a habitat “bank” for future use in compensation agreements. If the land is determined to not be suitable habitat, but could be with some restoration, SNC will create a management plan for that land.