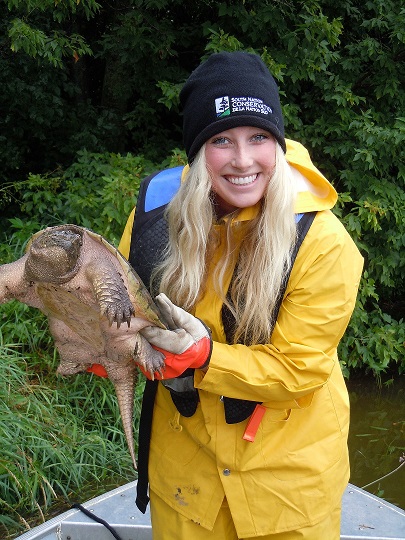 Our technical staff spearhead on-the-ground monitoring programs for aquatic species at risk. The South Nation watershed supports an incredible variety of aquatic life. Many of these species have been nationally listed as endangered, threatened, or of special concern in the federal Species at Risk Act.

Why Are These Species Important?

Most species at risk are sensitive to environmental changes. Aquatic species at risk require clean water and a healthy river to survive. If their populations are declining, it is a warning sign for the state of the river’s health.

We work with community partners and stakeholders to create and expedite leading scientific research in order to sustain a healthy aquatic ecosystem and encourage the long-term survival of aquatic species at risk. Stream surveys are conducted at minimally impacted sites across the watershed and include the monitoring of Rapids Clubtail (a species of dragonfly), Eastern Pond and Rainbow mussels, and Bridle and Pugnose Shiners (a species of minnow).

Additionally, we have led monitoring programs aimed at the presence, abundance and longevity of the American Eel, as well as six out of eight species of turtle found in Ontario. American eel, which was historically abundant in the region, is a highly valued fish species for Aboriginal peoples and early European settlers. Most species at risk in the watershed are declining due to habitat destruction, alteration, fragmentation, and disruption. Continued conservation efforts are invaluable to the health and longevity of species at risk, particularly those that protect habitat.

Turtles are known to be indicators of a healthy and ecologically stable watershed. SNC monitors the presence and location of six rare turtles in the watershed:

Have you seen species at risk in the watershed?

If you have observed a species at risk turtle in the SNC jurisdiction, please submit your observation data directly to the Ontario Reptile and Amphibian Atlas by clicking here.

*Please Note* SNC does not currently have a formal turtle watch program occuring at this time, however, we recognize that public knowledge is invaluable to the success of Ontario's monitoring and habitat enhancement efforts and encourage the public to submit their observations and photos directly to the Ontario Reptile Atlas at the link above. Learn more about species in your area here.