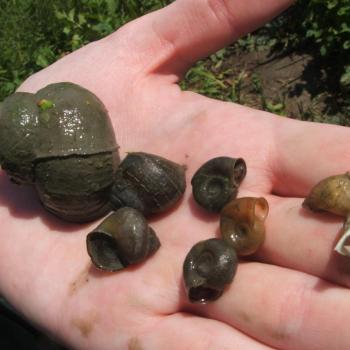 There are over 20 invasive species including terrestrial and aquatic plants, fish, aquatic invertebrates, and forests pests that were reported in the SNC jurisdiction.

Invasive species are a concern as they disrupt the natural ecology of ecosystems and biodiversity by outcompeting native species for food and habitat, which can have an impact on forestry, fishing and agricultural industries. Problems can occur when a species is moved to an area outside of its natural range and into an ecosystem that it could not get to on its own.

SNC has been working every year to monitor and control populations of invasive species and has hosted various community outreach events including the removal of Japanese Knotweed, Glossy Buckthorn, and Chinese Mystery Snail where residents can get involved in invasive species control.

In partnership with the Ontario Federation of Anglers and Hunters (OFAH), a student based out of the SNC office spends the summer completing educational and outreach initiatives and monitoring of invasive species.  The student promotes outreach materials to recreational boaters, cottagers, tourism operators, anglers and gardeners regarding different invasive species in the SNC jurisdiction.

Learn how you can prevent the introduction and spread of unwanted invasive species throughout the jurisdiction:

It is important to never move flora or fauna outside of their native habitat, and remove the invasive species already existing in your area. Landowners should check regularly to ensure that invasive plants have not established themselves on their property. To report an invasive species sighting within the South Nation Watershed, please contact us. Please include a description of the location and a photo, if possible.