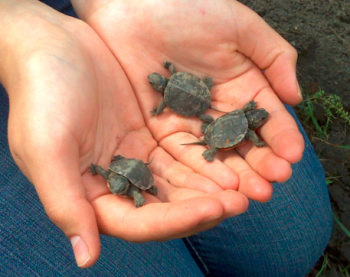 From more than 250 entries, South Nation Conservation has been selected as one of six national projects to be highlighted in wrapping up Shell’s $2 million national Fuelling Change program.

“It’s a prestigious sort of double win, the icing on the cake of the $50,000 Shell award that our Totally Turtles program won last year,” said Karen Paquette, SNC Project Lead.

The SNC entry “Totally Turtles: Protecting, Promoting and Enhancing Turtles at Risk” was a major winner thanks in part to online voters. An invitation was later sent to winners to enter a short essay describing the project with the prize to be national exposure.

Once again, SNC was a winner, Paquette explained: “It certainly doesn’t hurt to have the turtles project, one of SNC’s showcase programs, receive such great promotion. Who knows what it might lead to! It would be great to see other conservation agencies use our approach as a template.”

There are eight native species, seven of which are at risk that occur in Ontario. They include Spotted, Snapping, Stinkpot, Blanding’s, Spiny Soft Shell, Wood, Painted and Northern Map. SNC has been interested in the presence and welfare of turtles in the 4,200 square-km watershed since 2007.

Including a bilingual, curriculum-linked, education component, the Totally Turtles program has been a hit wherever presented, from classrooms to special events. It focuses on raising public awareness of the presence of turtles in our midst, on building safe, suitable nesting habitats away from high traffic areas, and on installing roadway crossing signs and protective fencing.

Paquette has noticed a marked reduction in road mortality wherever fences and turtle crossing signs have been installed.

Public participation and feedback remains a crucial component to the programs: “As we have from the beginning, we ask members of the public to alert us when they find a turtle dead or alive, a vulnerable nest, or a dangerous crossing.”

“The program strives to engage the public on best practices to ensure safety and preservation of these old and mysterious creatures,” Paquette observed.