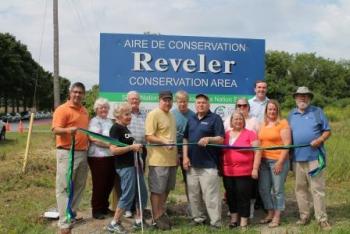 The 99 acres of diverse habitat donated by the family to SNC is located six km west of Crysler at the corner of Concession 10-11 and Reveler Road.

Representing the family at the official ribbon cutting was Ian Reveler while Chairman Bill Smirle represented SNC. Deputy Mayor Bill McGimpsey spoke on behalf of North Stormont. Participants enjoyed a barbecue, cake and other refreshments, along with a tour of the property.

“Reveler Conservation Area is a bit off the beaten track,” Smirle observed in thanking the family for their generous donation. “I’m sure many residents drive past it without thinking twice. But it’s easy to see why this is a favourite destination for bird lovers and outdoor enthusiasts.”

Ian Reveler said the family is proud to carry on the legacy launched when Ray Reveler bought the land in 1972. Ray grew up on the adjoining property and wanted to preserve the biodiversity on the site.

Reveler Conservation Area reflects much of Stormont County’s rich history. Around 1854, the first homesteaders were the Empey family. Oral history describes regular use of the woods by First Nations.

The land didn’t lend itself readily to agriculture, with some pasturing, apple orchards and maple sugaring. Prominent stone walls provide evidence of homesteaders working hard to make a living from the land.

The conservation area includes 10 acres of mature sugar maple, grasslands providing habitat for more than 100 bird species, a small pond, hedgerows, limestone outcroppings, and rare tree species such as butternut, rock elm and slippery elm. Endangered bird species such as bobolink, eastern meadowlark, and loggerhead shrike have been recorded at the site.

“The site will be managed to improve natural heritage features,” said Jim Hendry, SNC Team Lead, Property. “In particular, the goal will be to enhance habitat potential for grassland birds.”

Reveler Conservation Area is one of several of such natural attractions operated by SNC across its 4,200 square-km watershed. Depending on location, the free-admission conservation areas contain such amenities as hiking trails, picnic areas, boat launches and play structures.