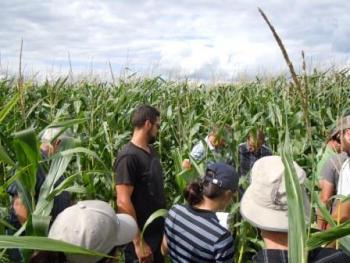 The visit Aug. 21 was a follow-up to one made last March to Lachute, Que., by SNC vice-chair Francois St. Amour,  Josee Brizard, Team Lead Forest Resources, and CWP representative Andre Pommainville to provide information on South Nation programs and approaches.

Interested in what they heard, a group of 11 Quebec farmers decided to travel to South Nation’s jurisdiction to see some of the projects in action.

After a general overview delivered at the SNC office at Finch, the group visited the Christian Lafleche farm for a presentation on controlled tile drainage from David Lapen of Agriculture and Agri-Food Canada.

A simple, inexpensive modification to existing farm field drainage systems permits water retention when conditions are dry and excess release when there’s too much.

“After many years researching controlled drainage, we’ve become experts in the process,” Brizard explained. “As part of the program, we share the knowledge gained with other organizations and farmers.”

After lunch and a tour of St. Albert Cheese Factory, it was on to the Marc Bercier farm at St. Isidore where use of cover crops is a common practice. A big fan of the livestock manure alternative, Bercier hosted a well-attended Cover Crop Information Day in July.

“The Quebec farmers refer to it as green manure,” Brizard observed. “It’s an excellent approach in terms of protecting clean water resources and in helping to keep topsoil in place between the rows.”

Introduced 22 years ago, the CWP is a partnership between the conservation authority and landowners to reduce contaminants entering rivers and streams. It’s been used as a model in other jurisdictions interested in a similar cooperative approach.