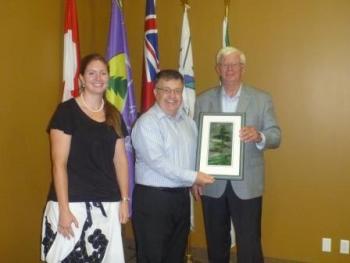 One of South Nation Conservation’s most consistent and enthusiastic partners has been recognized for a decade of caring about the natural environment.

The acknowledgement of Lafleche Environmental Inc. of Moose Creek as a “Friend of South Nation Conservation” came Aug. 20 during a regular meeting of the SNC Board of Directors.

“Lafleche Environmental has always been there for us,” said SNC Chair Doug Thompson. “That level of support has to start at the top and Andre Lafleche made environmental support a personal mission. It was Andre who first came to us looking to get involved.”

Lafleche was sold to TransForce Inc., a North American environmental services company, and the new owner continued to be supportive. TransForce was thanked for its ongoing commitment and corporate leadership in environmental issues.

Meanwhile, Andre and Lafleche family members have continued their philanthropic activities in the environmental and health care sectors.

“Over the years, Lafleche Environmental has generously partnered in various environmental projects,” said Pat Piitz, SNC Director of Science and Research, citing sponsorship of the Moose Creek Watershed Committee as one of Lafleche’s early actions.

“Lafleche is one of the companies that has set the pace for corporate participation in the watershed,” Thompson said. “The company serves as an example to others who might be considering becoming involved in environmental good works.”