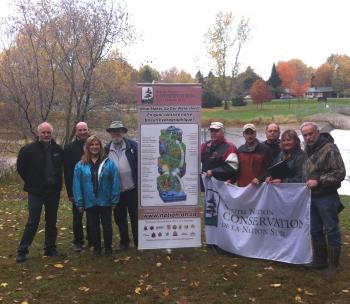 South Nation Conservation continues to focus on making life easier for what has become a rare regional fish species, the American Eel.

In September, three temporary eel ladders were installed on SNC water control structures at Crysler, Chesterville and Russell. Made of wood, plastic and metal, the ramps designed to facilitate eel migration will be removed at the end of October; the plan is to reinstall them in June.

Attached to the top of the structures, water flows through the ramps that have plastic inserts resembling pegboard filled with standing plastic pegs. These are what allow the eels to climb over a dam or weir.

SNC staff will explain operation of the ladders during a presentation at the Russell Weir, 10 a.m., Oct. 17.

The project was assisted by a $9,000 grant from the Species at Risk Stewardship Fund. The ladders will help provide access to the South Nation River upper watershed.

Black, slimy and snake-like, the American Eel isn’t everybody’s favourite fish. However, eels have long occupied an important ecological niche and, among First Nations, they’re considered a source of spirituality. To the Algonquin, the eel is a prayer carrier; it travels the furthest of all spawning fish, through both salt and fresh waters.

Eel numbers have sharply declined throughout their range and dams and other migration barriers are among the most significant causes, said Naomi Langlois-Anderson, SNC Senior Fish and Wildlife Technician.

Other factors impacting eel numbers are farming, pollution, habitat fragmentation and destruction, disease and over-fishing. In Lake Ontario, eel harvesting was the third largest of all commercial fishing activities until it was banned in 2004; estimates are that Ontario eel numbers have suffered a 90 per cent loss.

Launched in 2009, SNC’s monitoring program has yielded only five eels. In a separate general program, an eel was netted and released this summer; it weighed 410 grams and measured 565 mm. Since it was without a tag, the eel wasn’t one of 400 released at Carillon earlier in the summer.

“It may be an eel that managed to swim through both Beauharnois and Carillon dams,” Langlois-Anderson speculated. “Beauharnois has an eel ladder.”

Langlois-Anderson emphasized that SNC is always interested in hearing about sightings in the watershed and invites residents to pass along when and where eels have been seen.