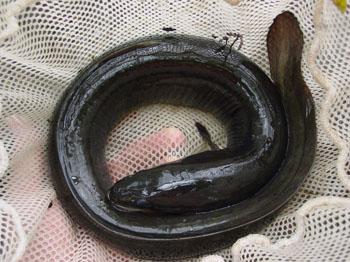 Have you seen an American Eel lately?

If so, South Nation Conservation wants to hear about it! Once plentiful in the South Nation watershed and throughout this part of the province, it’s estimated the eel population has declined by more than 90 per cent.

“Anglers have important information about where they used to see and catch eels,” Langlois-Anderson said. “For example, Kirby Creek at Chesterville used to have lots of eels, according to local lore. But we haven’t found any in our field work.”

The snake-like, brown-to-tan coloured eels with small pointed heads have traditionally been a staple in the diets of native North Americans. In a remarkable natural phenomenon, hatchlings swim 6,000 km from the Sargasso Sea to reach freshwater destinations where they feed and mature before returning to the sea to spawn 10-30 years later. They’re a protected species in Ontario.

“Except for First Nations, few anglers actually sought out eels,” Langlois-Anderson observed. “They were seen as a nuisance. However, in some European countries, smoked eel is considered a delicacy.”

SNC is partnering with First Nations representatives to compare current and historic abundance and distribution of eels in the 4,200 square-km drainage area. The project is focusing on the headwaters of the South Nation River north of Brockville and of adjoining tributaries of the St. Lawrence River.

It’s being funded by the federal Aboriginal Fund for Species at Risk and the provincial Species at Risk Stewardship Fund. Plenty Canada, which supports environmental protection and sustainable development, and Algonquins of Ontario are providing historical context and guidance for the project. The Mohawk Council of Akwesasne Environmental Department is also an important partner.

“SNC is fortunate to have partnered with Plenty Canada for more than 10 years,” Langlois-Anderson said, adding the eel project is seen as an important step in restoring “this ancient friend” as part of the process of reconciliation among indigenous peoples and the “settler population”.

With various partners, SNC has been tracking eels since 2009. Public participation is crucial, Langlois-Anderson reiterated: “If an eel is caught, please release it. A photo and information such as location of the eel, length, weight, and general condition would be welcomed.”