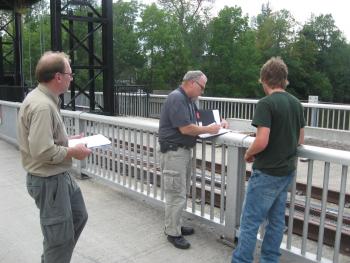 January 24, 2014 – Upkeep of dams, weirs, built channels and erosion prevention structures within its drainage basin is one of the ongoing priorities of South Nation Conservation.

That’s why SNC – with the help of provincial Water Erosion Control Infrastructure (WECI) - is implementing safety reviews and upgrades of retention structures at Chesterville and Crysler. The structures in question are the Chesterville Dam, the Crysler Dam and the Crysler Dyke.

“There are some outstanding projects to be undertaken at the three structures that won’t impede flow or cause any other inconvenience and the time is right to get them done,” Mancini explained.

“Our objective is to ensure the structures don’t pose unacceptable risk to public welfare, property, the environment and cultural resources.”

Mancini noted that provincial guidelines and approvals are in place that owners must adhere to when operating and managing their water retention structures. To financially assist conservation authorities with upkeep, the Ministry of Natural Resources devised WECI, a 50 per cent cost-sharing program.

Since WECI was launched 10 years ago, more than $825,000 has been allocated to maintain and improve SNC’s seven eligible structures, generating thousands of dollars in local economic activity.

In the upcoming round of upgrades at Chesterville and Crysler, close to $100,000 will be spent on an assortment of projects.

The existing Chesterville Dam was constructed in 1978 as part of an extensive South Nation River flood control and low flow augmentation project. The structure manages a total drainage area of 1,050 square-km.

An audit recommended that operational procedures and safety measures around the dam be reviewed. The same study indicated that, while protection devices at the dam are acceptable, the presence of a nearby school and park popular with local children “increases the risk of dangerous actions such as jumping from the dam.” Different options for adequately fencing the site will be assessed.

Moving down river to Crysler, that dam controlling a drainage area of about 1,300 square-km underwent significant modification and reinforcement in 1975.The audit pointed out that the dam’s north abutment is

cracked and the upstream portion of the north retaining wall also appears to be in poor condition. Mancini said $63,000 has been set aside for the necessary repairs.

Other projects include a review of public safety aspects at the Crysler Dam, and an integrity assessment of the Crysler flood control dyke built in 1984.