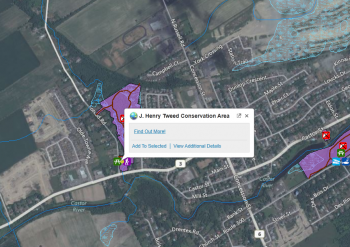 February 13, 2014 – Be prepared to be impressed by South Nation Conservation’s new public Geoportal, launched for all to see Feb. 13.

Like all other South Nation information and connection services, the Geoportal - a Geographic Information System (GIS) web mapping application – will be accessible at www.nation.on.ca.

“We’re finally getting our site where we want it,” said Ronda Boutz, SNC Team Lead Communications and Outreach. “It’s been under reconstruction for months and now we can offer some of the latest techniques in presenting our Watershed and making our services available to the public.”

SNC oversees 4,200 square-km of mostly farm and forested land drained by the South Nation River and its tributaries. That’s a lot of data and the Geoportal attempts to centralize it, Boutz explained. SNC staff use a separate internal Geoportal to guide their work; the new public version offers a similar experience with simplified features.

GIS Technician Jackie Edwards demonstrated the new Geoportal at a recent SNC Communications Meeting where members were impressed by its many features, not least of which is relative ease of entry and operation. Some small changes were suggested that will be incorporated into the system.

Edwards said the Geoportal isn’t cast in stone and welcomes input from members of the public once they’ve become familiar with it.

“We’re inviting residents to use this tool to explore what the watershed has to offer. We’re interested in feedback about ease of navigability, loading times and other suggestions.”

Before entering the Geoportal, users must accept a disclaimer about the information provided. Edwards said no one should be put off by it. It’s a standard form covering off the fact that full accuracy can’t be guaranteed because of changing conditions in the watershed.