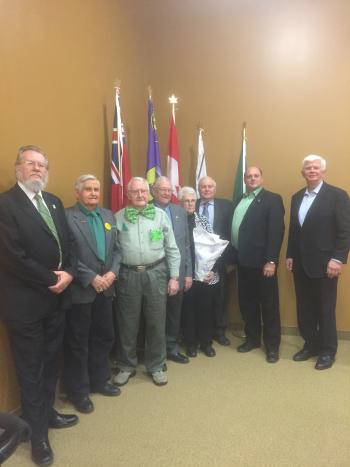 But perhaps the main highlight of the St. Patrick’s Day meeting will be a tribute to past chairman Lorne Strader towards the end of the agenda. Strader served on the board for 15 years, beginning in 1977 as an elected representative from Matilda Township.

“Lorne was a very active member of the board at a time when SNC was engaged in some of its biggest projects,” said General Manager Dennis O’Grady. “His contribution was invaluable.”

That contribution will be officially recognized by current Chairman Doug Thompson. Over the past few years, SNC has introduced a practice of honouring during regular meetings residents of its jurisdiction that have gone the extra mile in helping to protect and promote the natural environment.

“It’s not just for past board members,” O’Grady observed. “People from all walks of life have been acknowledged.”

A former municipal politician, agricultural activist, and community volunteer who received a Queen Elizabeth Diamond Jubilee Medal, in 1979 Strader became a member of the SNC executive committee and vice-chairman in 1981; he moved up to chair of the authority in 1983.

Some of the projects he helped implement included the Chesterville channelization, the Crysler flood control dyke project, a critical area tree planting program, and preservation of the Spencerville Mill.

Continuing after his past chair position, Strader played an important role in the Conservation Awareness Advisory Committee, serving as chair from 1989 to 1991.

“Those projects are part of the foundation of what SNC has become today,” O’Grady said.