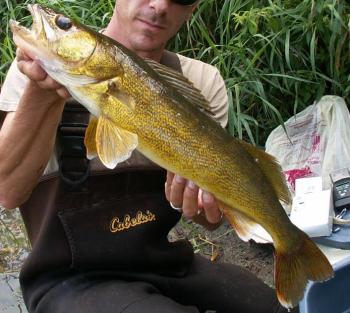 This spring, a group of volunteers from the Mohawks of Akwesasne are harvesting eggs from the South Nation River walleye at their hatchery facility, in efforts to support the recovery of local walleye populations in the St. Lawrence River.

Hoop nets will be used to catch approximately 12 to 15 adult walleye during their spring spawn, and after removing the eggs and milt, the unharmed fish will be returned to the South Nation River. The eggs will then be cultured and released into tributaries of the St. Lawrence River.

“This activity is not expected to have any impact on the local walleye population.  The locations where they will set-up hoop nets are mainly in the upper South Nation River, near Spencerville and South Mountain,” says Naomi Langlois-Anderson, SNC Senior Fish and Wildlife Technician.

Mohawk Council of Akwesasne Grand Chief Abram Benedict noted that “with the decline of Walleye and other fish species, Mohawk Council will ensure that every effort is made in order to assist with the revival of walleye populations while ensuring that the spawning beds and local habitats are not disturbed in the process.”

Walleye is one of the most economically valuable species of fish in Ontario but anglers have noted declines in local populations, often citing over-harvesting of adult females as part of the reason for declines of spawning adults in the Cornwall area of the St. Lawrence River.

Walleye prefer turbid lakes and streams that protect their light-sensitive eyes.  The South Nation River provides ideal habitat for this species as it is turbid and muddy looking, due to the predominantly clay soils of the surrounding lands.

“Although angling pressure may be less on the South Nation River compared to the St. Lawrence River, studies show that most eggs to do not hatch successfully in the wild due to predation by birds and other fish, and low water levels that expose the eggs,” explains Langlois-Anderson.

“That’s what makes efforts such as these, conducted by the Mohawks of Akwesasne, crucial in supporting recovery efforts of this species”.