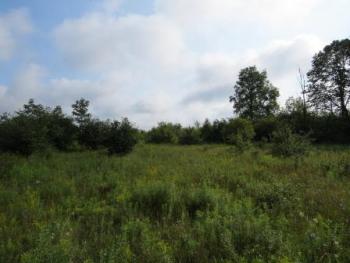 Crucial grasslands have been undergoing a steady decline in Eastern Ontario and South Nation Conservation (SNC) is working to slowly reduce the trend through projects that promote grassland restoration.

A main focus this year is the restoration of 25 acres of grassland at Reveler Conservation Area in the Township of North Stormont. The work involves the removal of select trees and shrubs to reduce canopy cover, increasing the amount of open grassland area.

Work for this project was completed with funding support from Ontario Power Generation (OPG). Through a three-year partnership with OPG, the SNC Biodiversity Project promotes habitat restoration for plants and animals in woodlands, grasslands and wetlands across the SNC jurisdiction.

The grasslands component of the Biodiversity Project aims to create or restore grassland habitat and increase biodiversity.

Rural grasslands offer habitat, shelter and food to many wildlife species, including the Threatened Bobolink and Eastern Meadowlark.

“These birds nest and forage for insects and rely heavily on grasslands for survival,” said Carl Bickerdike, SNC Team Lead, Corporate Services. “These unique habitats are sustained by pollinators such as bees and butterflies.”

Through site assessments, maintaining diverse habitats at Reveler Conservation Area was identified as a top priority for 2015. This conservation area was recently acquired through a property donation.

The diversity of the habitat at Reveler Conservation Area provides a great opportunity for residents and visitors to observe many of the 109 bird species that this property supports.

“This is another example of how important gifts of property are to SNC and to residents in our jurisdiction,” Bickerdike said. “Not only is the property acquired for preservation and public enjoyment, but it’s enhanced for maximum wildlife benefit.”

Trails are currently closed at Reveler Conservation Area while the work takes place, though Bickerdike noted that the area will soon be open again for public day use.

OPG produces more than half of the electricity that Ontario homes, schools, hospitals and businesses rely on each day. They are committed to ensuring their energy production is reliable, safe and clean for Ontarians today and into the future. Having delivered North America’s largest climate change action by phasing out coal generation in 2014, OPG’s power is now 99.7 per cent free of smog and greenhouse gas emissions.