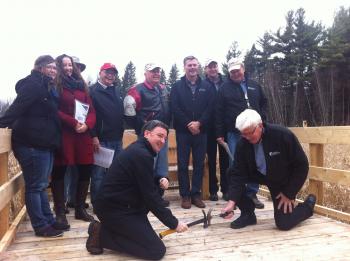 Outdoor enthusiasts are invited to come and enjoy for themselves a long list of upgrades completed at Warwick Forest Conservation Area east of Berwick.

Warwick Forest is a collection of several parcels of land owned by the United Counties of Stormont, Dundas and Glengarry, South Nation Conservation (SNC) and the Province of Ontario.

SNC maintains Warwick Forest as part of a network of 15 day-use, admission-free Conservation Areas in its 4,300 square-km jurisdiction.

Ongoing since September, major improvements have been made to six kilometers of Warwick Forest’s walking and hiking trail, including a new connecting loop that ensures users don’t have to rely on the public road to return to the parking lot.

Official unveiling of the improvements occurred on site Nov. 27, with opening remarks from project partners, a ceremonial hammering of the last nail into the new boardwalk, and refreshments.

The boardwalk features a wetland viewing platform with a lookout from which blue and green herons, and barred owls can regularly be seen.

SNC funding partners include the United Counties of Stormont, Dundas and Glengarry and the National Trails Coalition.

In addition to trail resurfacing, the loop and boardwalk, the project also included a new bridge, culvert enhancements, tree-trimming, installation of signage and gates. A brochure directs visitors through the nine interpretive stops.

“The existing trail was in rough shape because trucks and ATVs had been using it,” said Jim Hendry, SNC Team Lead, Property. “Large ruts and water-filled holes were creating hazards for hikers and horses.”

With the weather now changing, Hendry reminded area residents that most SNC recreational facilities are open and trails are groomed during the winter. For the full list of outdoor options, check www.nation.on.ca/recreation.