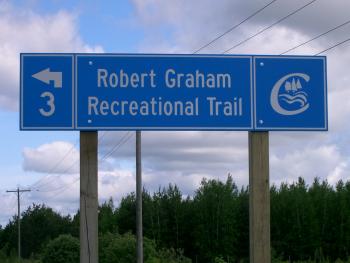 Vernal pools are shallow depressions in the ground where seasonal run-off water can collect. These temporary pools serve as homes and breeding grounds to a number of distinct plant and animal species such as the Western Chorus Frog.

Pools are being created in the southeast end of the Conservation Area and are to be completed by the end of the week. According to Cavanagh, bare earth and further restoration efforts will still be visible throughout the month. A section of the trail will remain temporarily closed while work continues.

Although most vernal pool habitats are small, their complex food webs sustain many larger species of birds, mammals, amphibians and reptiles and complement a healthy ecosystem. Vernal pools are a valuable and increasingly threatened ecosystem in North America, often smaller than the bulldozer that could so easily destroy them.

Work for this project was completed with funding support from Ontario Power Generation. OPG produces more than half the power used by homes, schools, institutions and businesses in Ontario. Since closing the last of its coal stations in 2014, the electricity OPG produces is now 99.7 per cent free of smog and greenhouse gas emissions.

Through a three-year partnership with OPG, the SNC Biodiversity Project promotes habitat restoration for plants and animals in woodlands, grasslands and wetlands across the SNC jurisdiction.

In the meantime, Cavanagh encourages trail users to continue to use the SNC’s recreational properties year-round, not only in the summer.

“We would like to remind visitors to stick to the designated trails and respect the natural environment around them,” said Cavanagh.