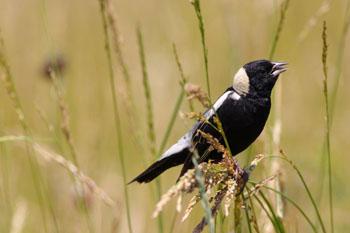 South Nation Conservation (SNC) will be undertaking grassland restoration work this fall intended to promote the recovery of the Bobolink and Eastern Meadowlark in Eastern Ontario, two birds that are Species at Risk.

“The benefit is two-fold,” said SNC Biologist Michelle Cavanagh. “Not only do the two at-risk birds acquire another 86 acres of nesting habitat, but the work also increases the amount of rare grassland in the area for the benefit of other species.”

The improvements will be conducted on portions of two SNC properties and within the Upper Canada Migratory Bird Sanctuary on the St. Lawrence River near Ingleside. The SNC properties are located in North Stormont and in North Dundas townships.

The projects will involve removing trees and shrubs and seeding with a mix of native grasses and wildflowers. Once the habitat is established, it will be maintained through mowing late in the fall every two-three years.

Habitat restoration projects such as these help offset the decline of native grasslands in Ontario and right across North America.

“Monitoring for the two bird species in question will occur every spring,” Cavanagh explained, adding that signs will be posted while work is underway to advise the public of the ongoing project.

The SNC properties where restoration will take place were once donated agricultural lands. With no active management occurring, over time the grassland portions of the properties were taken over by shrubs and trees.

In addition to managing and enhancing water resources, SNC’s mandate includes improving forests, wildlife and fish habitat, along with providing recreational opportunities within its 4,382 square-km jurisdiction.