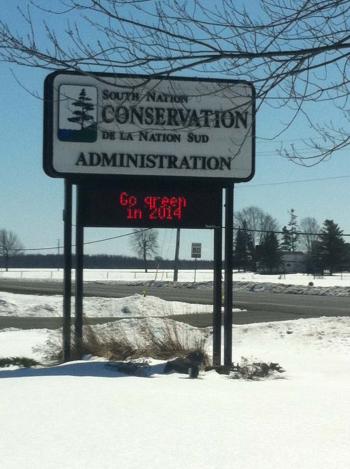 March 31, 2014 – Beginning April 3, South Nation Conservation will provide clients seeking permits and approvals with an extended service option at its headquarters in Finch.

Following a decision by the Board of Directors, as of April the office will remain open Thursdays beyond the regular 4 p.m. closing time until 7 p.m.

The board decided on the late opening following a recommendation from Angela Coleman, SNC Director of Properties and Approvals who observed that some municipalities within the Watershed have taken similar action.

“Some companies, banks, and law and accounting firms have also adopted this approach as an effective customer service model,” Coleman told board members, adding the extended service will be most beneficial at times of high permit and approval traffic; depending on uptake, the approach could become seasonal.

In a related matter, the board acted on a recommendation from Coleman that SNC staff, when invited, be available to accept applications and permit requests at municipal offices within the Watershed on an agreed-to day every month.

The precedent has already been set, she noted, with SNC planning staff sharing City of Ottawa office space one or two days a week. In smaller municipalities, SNC staff could be available to work at local offices from a half-day to one full day each month.

“We can use the opportunity to monitor key issues and better serve the public and development community. It’ll minimize misunderstanding on files and open lines of communication with municipal staff, allowing us to understand each other’s key challenges and come up with solutions.”

Adding to the late night at headquarters, a regular staff presence in municipal offices will increase the level service yet again by allowing clients at either end of the Watershed to avoid a trip to Finch.