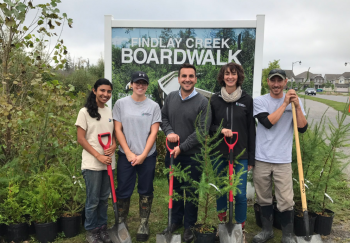 South Nation Conservation (SNC) is working to reduce the trend of declining wetlands in Eastern Ontario through projects that promote habitat restoration and improve biodiversity.

“Wetlands play a key role in the health of our local ecosystems,” said Katherine Watson, SNC’s Water Resources Specialist. “They filter pollutants before they enter streams, provide important habitat for rare animals and plants, and act as natural flood control.”

This year’s stewardship efforts included the enhancement of approximately 1 acre of rare fen habitat in the Leitrim Wetland. This rare calcareous fen is fed by small streams running through peat moss and is home to insect-eating pitcher plants. Designated as a Provincially Significant Wetland and an Area of Natural and Scientific Interest, this space is also home to hundreds of plant and animal species, including 90 resident bird species.

With the help of local volunteers and funding support from Patagonia, SNC staff worked to remove Glossy Buckthorn from the fen habitat, followed by the planting of native shrubs and tree species.

Glossy Buckthorn is an invasive shrub, native to Europe, which was first observed in the Leitrim Wetland in late 1980s. In certain areas of the wetland, coverage of Glossy Buckthorn approaches 90%.

On October 22, SNC also hosted the Leitrim Wetland Eco-day at Diamond Jubilee Park in Findlay Creek for residents of the area. Over 60 participants enjoyed an interpretive hike along the Findlay Creek Boardwalk and an afternoon demonstration featuring local plants and animals for youth.

This year’s fen restoration project is just one of the many ongoing stewardship efforts that SNC completes within the Leitrim Wetland each year, with the support of Tartan and Tamarack Homes and the Findlay Creek Community Association.