PASSPORT PROGRAM A HIT WITH GEOCACHERS 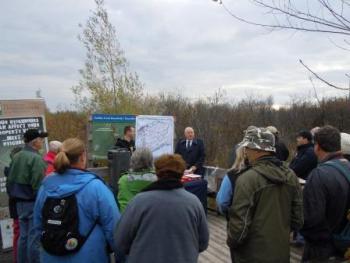 There are some real keeners out there!

Three avid adventurers have found all 20 geocaches concealed within the 4,200 square-km South Nation Conservation watershed as part of a program to encourage residents to explore their region.

Another 12 people have found 15 caches. Since the program was first announced Sept. 12, the hidden treasures have been found a total of 465 times.

Called the Watershed Geo-Passport, it was officially launched Oct. 25 during a gathering at the Findlay Creek Boardwalk attended by about 50 people.

“We wanted it to make it fun for the whole family,” said SNC GIS technician and dedicated geocacher Tim Jackson. “Ultimately, we want participants to get the satisfaction of finding the caches. And the real objective is to help people discover the natural attractions in their own backyard.”

Geocaching is a high-tech treasure-hunting game played throughout the world by adventure seekers equipped with GPS devices and smartphones. The basic idea is to locate hidden containers – geocaches – outdoors and then share experiences online.

Across Eastern Ontario, there are thousands of geocaches and hundreds of geocachers searching for them. Those interested in the SNC event can download their Geo-Passport along with a map of the caches from www.nation.on.ca.

The caches concealed by SNC highlight sites of educational, historical or recreational significance. Participants enter their finds in a logbook with their geocaching user name and the date, making sure to take note of the code words at each cache. After logging at least 15 sites, a Geo-Passport can be redeemed for a colourful, collectable SNC Geocoin.

In various postings, SNC has been receiving applause for the program such as: “Well done for embracing this game and running us around to some great locations, teaching us a little something along the way.” And: “It took a bit of ingenuity and dexterity to retrieve the cache but…we’re in! One more down in this tremendous series! Well done South Nation.”

Jackson said it’s just the kind of reaction organizers were hoping for when they decided to use geocaching as a tool for regional discovery and education.