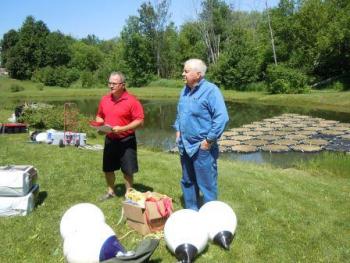 A green alternative to combatting algae growth in a La Nation’s storm water treatment pond at Limoges has been deployed by South Nation Conservation.

Proven technology, the wetlands are constructed from durable, non-toxic recycled plastics and vegetated with native plants, providing a surface area for growing large amounts of microbes in a short period of time.

“Simply put, nutrients in the water circulating around a floating wetland come in contact with the plants and microbes and are consumed by them.”

The concept was introduced June 17 to representatives of SNC, La Nation and other municipalities who gathered in Limoges. As are all Ontario conservation authorities, SNC’s board of directors is composed of delegates from municipalities within its watershed.

For the past 20 years, SNC has been developing and experimenting with natural approaches to nutrient load and pollution reduction management, including on-farm constructed wetlands and tile drainage control gates. The floating wetland is among the latest developments.

Symington said floating wetlands treat storm water runoff without the use of chemicals to reduce algae infestation. Other possible applications include in treatment of municipal wastewater, waterways degraded by agricultural runoff, and ponds and lakes impacted by waterfowl or septic systems.