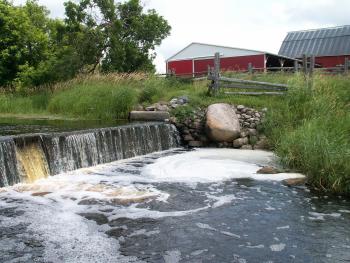 May 12, 2014 – South Nation Conservation has bypassed a dam and reconnected Indian Creek for fish passage, and is inviting kayakers to come out for a look at the project May 24.

Kayak enthusiasts are asked to meet at John and Sally Patrick’s farm near Roebuck east of Spencerville at 10 a.m. Because of Indian Creek’s shallow depth and narrow width, canoes aren’t recommended.

After a brief presentation at the fish ladder, SNC staff will lead kayakers down Indian Creek to where it joins the South Nation River. Paddlers will continue to the Spencerville Mill to view the mill in operation, tour the grounds and enjoy lunch.

The dam is on the Patrick property and can be seen from the north side of County Road 21 at Indian Creek Bridge. In place since the early 1800s, the small dam used to prevent fish from migrating to the upper portion of the creek, almost two-thirds of the entire system.

“Locals mentioned that formerly good fishing holes had run out,” said Naomi Langlois-Anderson, SNC Senior Fish & Wildlife Technician. “So we designed a ladder to help fish through the dam and back to some of those favourite spots.”

Some years ago, Langlois-Anderson completed a Natural Design Channel Course teaching how to construct fish passages that comply with the ecosystem. Everything from bends in the stream, flows, banks, widths, depths and pool riffle sequences are predicted using mathematical equations.

“I was eager to put my knowledge to use,” she said. “I was fortunate that the Patricks agreed to the fish ladder on their property.”

The dam was built by early settler Jacob Heck as part of his sawmill operation; in the 1940s, it was reinforced with cement. The Patricks farm beef and like to manage water levels in the millpond.

The new fish ladder was designed using a bypass channel cutting through the millpond berm and extending 116 metres to outlet below the dam wall, about 40 metres downstream.

“It’s another example of how SNC works to enhance both the fishery and habitat in the watershed,” Langlois-Anderson concluded.

For details and to register for the outing: nlanglois-anderson@nation.on.ca.