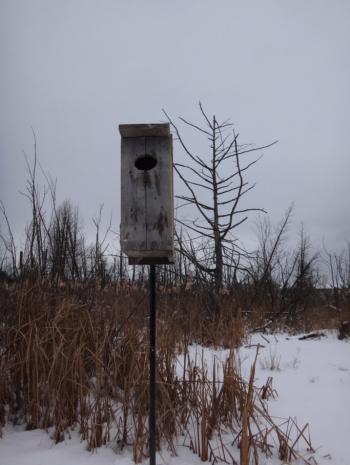 It may seem like the timing is off, but with the Eastern Ontario landscape frozen solid, it’s actually the perfect time for urban conservationists to prepare for spring arrival of various waterfowl.

That’s why South Nation Conservation is collaborating with volunteers to install Wood Duck nesting boxes in the Leitrim Wetland. Twenty five boxes have been put up to date. Other birds such as the Eastern Screech Owl are also known to call the boxes home.

Wood Ducks normally nest in tree cavities; when there are none available, hens will settle for man-made boxes with openings facing the water. Deployment of several boxes in a given area can be used to increase the local population of waterfowl.

The initiative will be described and a photo opportunity held Jan. 9 at 10 a.m. at Findlay Creek Boardwalk. It’s part of the Stream Watch Program that relies on local residents to monitor water quality and help enhance wildlife habitat in the 4,200 square-km SNC watershed.

"The best time to install duck boxes is during the winter," said SNC Fish and Wildlife Technician Philip Duncan. "It gives you the ability to walk across the ice to the chosen locations and erect the boxes."

Duncan described it as a terrific way for SNC to interact with the community: "Projects like this help enhance urban wildlife and serve as an educational opportunity for volunteers who become actively involved in wildlife management."

The volunteers are a big help in transporting materials, erecting mounting posts, attaching the boxes and predator guards to keep out unwanted occupants such as raccoons. Each box is filled with wood shavings to provide suitable nesting material for the ducks.

Volunteers also take part in annual maintenance of the boxes, including providing fresh shavings. Often, the nests of opportunists such as the European Starling have to be removed.

Built to last from cedar, the boxes were put together during an SNC team building effort. Each entrance hole is three by four inches in size and designed to entice female ducks.

As a bonus to the Wood Duck nesting project, volunteers get to see wildlife in close proximity to residential areas such as ermine, otter, muskrat and beaver.