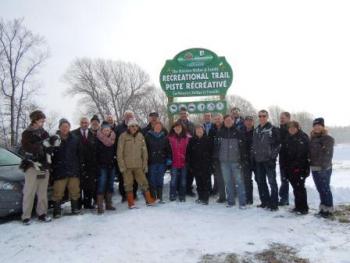 News release issued on behalf of the Township of North Stormont

The Township of North Stormont, along with South Nation Conservation (SNC), is proud to announce the grand opening of the ‘Menzies McRae & Family Recreation Trail’ in Moose Creek. The ceremony will be held on Friday, December 12th at 10:00am at the north entrance of the trail (16810 8th Road, Moose Creek, K0C1W0). This trail was made possible through a generous donation from Lafleche Environmental, a company located just outside the village. The trail, which is around 1 kilometer in length, is dominated by soft maples, hemlock, cedars and yellow birch. It also has a variety of wildflowers in the springtime as well as a diverse selection of bird species.

Six years ago a trail concept was brought forward by two citizens of Moose Creek. SNC, alongside the Moose Creek Watershed Committee, examined possible venues for this trail, and it was through a generous offer from Mrs. Viola McRae that our current location was chosen. Her husband enjoyed walking the trail, and as such, his name was chosen as the trail’s official title. For the last three years the Township and SNC have been working to ensure that the legal agreements, surveys, permits, funding and designs were all complete. This trail will be managed by a dedicated group of volunteers from the community, with assistance from both SNC and the Township of North Stormont.

Each organization played an integral part in the development and implementation of this project. A new walking trail provides the citizens of Moose Creek and all of North Stormont with the opportunity to live healthy and active lives. We would like to thank Lafleche Environmental and SNC for all their efforts in this project. For more information, quotes, or to do a story on any of our community driven initiatives please contact: