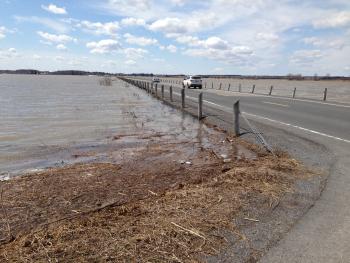 The recent high water levels have peaked and are slowly decreasing allowing for additional instream storage of runoff. The confluence of the South Nation and Ottawa Rivers is ice free allowing better drainage of the system.

Environment Canada is forecasting 20 to 50 mm of rainfall in the northern portions of the watershed, beginning late Saturday evening through Tuesday. This event has the potential to significantly increase water levels again in the Casselman to Plantagenet area.  South and central areas of the watershed have a lower forecasted amount of 15 to 30 mm. Rainfall amounts in any particular area of the watershed may be more or less than these amounts depending on the track taken by the storm system, which is uncertain at this time.

Residents in flood prone areas should keep watch of local conditions and take appropriate measures to protect their properties from flooding. Some road closures may continue for several days depending on rainfall amounts received. Information on location of road closures can be viewed on SNC’s Public Geoportal, accessible through SNC’s website (www.nation.on.ca).

SNC staff will continue to monitor water levels and weather forecasts, as part of the Flood Forecasting and Warning Program, and provide updates during this event.

SNC encourages the public to visit www.nation.on.ca and share your feedback on changes in water related conditions, such as high water elevations, flooding of roads, and ice break-up.