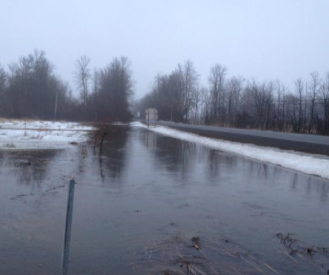 It’s that time of year; one of the most scenic across the 4,384 km2 South Nation Conservation (SNC) jurisdiction, with rivers and streams shedding winter ice, opening up to the coming spring, summer and fall.

It’s also the most dangerous time of year around watercourses. Children are attracted by the ice breakup and the high water. Some tend to wander very close.

“We encourage parents to keep an eye on children playing anywhere near streambanks and to keep them a safe distance away,” said Sandra Mancini, SNC Senior Water Resources Engineer. “We would be devastated if their natural curiosity to lead to tragedy.”

The spring freshet – a large burst of meltwater into streams and rivers – is a busy time for SNC. “Hibernation is over and it’s time to get to work in the field.”

In coming weeks, SNC staff will conduct roadside monitoring of snow meltwater, particularly along South Nation tributaries to measure Headwater Drainage Features, temporary streams without a defined bed or banks that can occur just about anywhere in the watershed depending on the nature of the annual melt.

Also at this time of year, SNC staff measure snow depth and the water equivalent at 7 locations across the Jurisdiction. Data collected indicates how well snow will be able to absorb rainfall and excess water. Ice thickness along the South Nation River is also measured when conditions permit.

The operation of the Chesterville Dam, the largest water retention structure in the system, helps control water levels and flooding by adjusting its gate and stop logs.