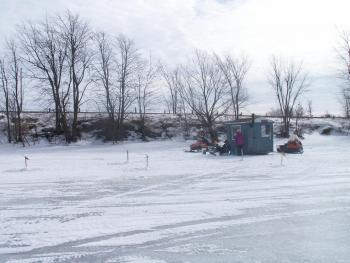 March 7, 2014 – With the 2014 ice fishing season coming to a close across Eastern Ontario in March, South Nation Conservation is reminding enthusiasts to clean up when they remove huts or say goodbye to their favourite winter spots to drop a line.

All huts out on frozen bodies of water in the region – which were required to be registered with the Ministry of Natural Resources and display their numbers outside – must be removed by March 15. Abandoned huts can end up cluttering waterways when the ice thaws, an offence under the Public Lands Act.

For the fifth year in a row SNC is sponsoring a publicity and monitoring campaign aimed at cutting down garbage left in the wake of the ice fishing season.

“The message we’re trying to convey is clear,” said SNC resource technician Ryan Robson. “Keep trash and deleterious substances off the ice so they don’t end up in the water which disrupts aquatic life and may reduce drinking water quality. Not only are you helping the environment, you’re making the winter outdoor experience more enjoyable for everyone.”

Among other approaches, SNC staff is making direct contact with anglers during general visits to fishing spots and while conducting an ongoing survey aimed in part at determining where various species spend the winter months in the watershed.

The coverage area extends along the South Nation River from its headwaters north of Brockville to its outlet in the Ottawa River near Plantagenet; major tributaries such as the Castor River will also be sampled.

Anglers interviewed as part of the survey will be asked basic questions such as their target species, weight and length of fish caught, amount of time and number of days spent ice fishing in the watershed. The information will help determine fishing pressure and overall health of the South Nation fishery.

SNC staff will be conducting a final check on or after March 15 to ensure structures are off the ice; those remaining will be reported to MNR. Fishers are reminded to exercise good judgment when venturing on to the ice at this time of year as fluctuating temperatures can create unstable conditions.

Into its fourth year, Robson said the clean-up campaign seems to be making a difference with fewer complaints coming in about garbage on the ice.