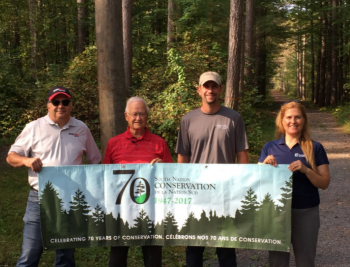 A new three-year partnership with Ontario Power Generation (OPG) and the United Counties of Prescott and Russell (UCPR) will allow South Nation Conservation (SNC) to restore and enhance river and wetland habitat in Larose Forest.

A funding announcement on Wednesday, September 27, brought representatives from OPG, UCPR and the City of Clarence-Rockland together to visit the project site and learn more about SNC’s planned restoration work.

“We are pleased to be working with our partners to support conservation initiatives in the communities in which we operate,” said Michelle Cavanagh, Team Lead, Stewardship.

As most of Larose Forest was planted on failed agriculture lands back in the 1920’s and 1930’s many straight agriculture ditches are found throughout the forest. In this particular area there are many man-made drainage features that are limiting the ecosystem’s ability to serve as headwater drainage features for the Bear Brook Subwatershed.

The project site was originally a red pine plantation, which failed due to wet conditions of the site. A salvage cut occurred four years ago which removed the dead and damaged trees, providing an opportunity for restoration.

Over the three years, staff will work to repair the function and habitat of headwater drainage features, improve water quality by reducing sediment and erosion, and increase instream and upland biodiversity by planting a diverse riparian area.

“Projects like these work to reduce risks such as habitat loss, effects of climate change, pollution and invasive species.”