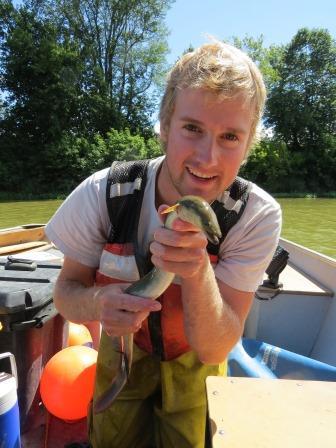 It was one of 18 different fish species netted in an ongoing effort to examine diversity on the South Nation watershed covering 4,200 square-km of Eastern Ontario.

The eel wasn’t the only exceptional find in the catch-and-release program conducted annually by SNC technicians; this year, the targeted area was Lemieux Reach between Casselman and Plantagenet.

Also caught was a 37-pound, 6-ounce male snapping turtle, the biggest on record since SNC began its high-profile Totally Turtles protection and enhancement program back in 2006.

“A turtle that large has to be 80 to 100 years old,” said SNC technician Philip Duncan. “It’s an important find because snapping turtles - as do other turtle species in the watershed – are heavily impacted due to habitat degradation and road mortality.”

Although not seen to be at risk, the snapping turtle is listed as a species of special concern. It’s one of seven native species encompassed under the Totally Turtles program.

Also netted along Lemieux Reach were two other snapping turtles and two painted turtles. In all cases, the shells were notched to help identify individual animals if caught again. The monitoring program also helps identify areas in which habitat enhancement and stewardship projects are desirable.

Biologists from the Canadian Wildlife Federation scanned the 565-mm, 454-gram eel in question to determine if it was one of 400 released in the Ottawa River above Carillon Dam.

“The eel didn’t have a tag which indicates it’s a resident of the South Nation River system,” Duncan indicated.

He added that biological monitoring is important in that it allows SNC to track changes in the watershed and apply appropriate management strategies to enhance both fish and wildlife.