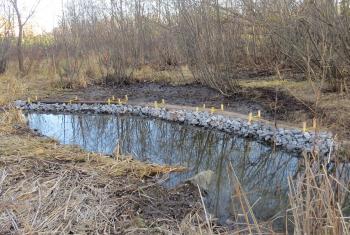 Two major riparian rehabilitation projects have been completed by South Nation Conservation (SNC) staff under the City of Ottawa’s Water Environment Strategy (WES), a program designed to protect the health of city waterways, wetlands and groundwater.

The primary thrust of WES is to reduce and repair the impact of human activity while helping to ensure safe, abundant drinking water; supporting agriculture, recreation and tourism; lessening the impact of flooding; and sustaining fish and wildlife.

The projects were conducted on Shield’s Creek, Greely and along the North Castor River.

The City of Ottawa is a major municipal partner of SNC which undertakes regular environmental improvement programs within the rural south east sector of the City.

SNC designed and applied stream restoration techniques to disturbed riparian areas and installed border timbers around a playground to prevent sand from entering the watercourse. Tree and shrub plantings, Douglas Fir and coconut fiber logs, a stone crib wall, and an erosion control blanket were part of the remedial package.

Along the North Castor River, two abandoned water crossings were identified that were no longer functioning as intended. They were acting as barriers to fish migration, sediment traps and were impeding flow, Boudreau Ivany explained.

“They also contributed to pooling upstream that can cause higher water temperatures and lower dissolved oxygen.”

The crossings were removed, including pulling out all debris and culverts from the river, and placing boulders from the crossings in strategic locations to create riffles which water now flows over becoming agitated and oxygenated.

“The work done will provide diverse instream habitat for fish and other aquatic organisms.”

Part of the North Castor project included planting 300 trees and shrubs to help stabilize and naturalize the slopes, while providing shade and increasing habitat.