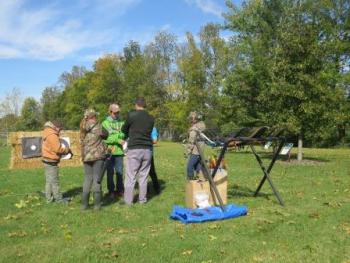 Now in its ninth year, the program mentors young people in safe hunting practices and waterfowl habitat. It’s a joint project of South Nation Conservation (SNC) and the Delta Waterfowl Foundation which cover all costs.

The program consists of three weekends in September where participants take two training courses, culminating with a goose field hunt in October. There are 10 spots available.

Again this year, the main event has been named the Dan Dufour Memorial Hunt in honor of a co-founder of the South Nation Chapter who recently passed away. Dufour was instrumental in organizing the group’s annual fundraising banquet.

Successful involvement in the program will earn participants their apprentice hunting and firearm’s license. Since it was launched, more than 80 young residents in the SNC jurisdiction have passed through the course.

During the final weekend, young participants and their parents take part in a meet-and-greet where they receive a free lunch and presentations from Conservation Officers, trappers and SNC staff.

Interested youth are encouraged to write a letter explaining their interest in conservation and why they’d like to be chosen among the 10 finalists. A scanned copy of the letter should be emailed to pduncan@nation.on.ca, or the original can be mailed to Philip Duncan, South Nation Conservation, 38 Victoria Street, Finch, ON, KOC 1KO.

“Because of the limited numbers, participants will be selected on the contents of letters submitted,” said Duncan, SNC Property and Approvals Assistant II. “The idea is to assess an applicant’s conservation instincts, even more than his or her interest in hunting.”