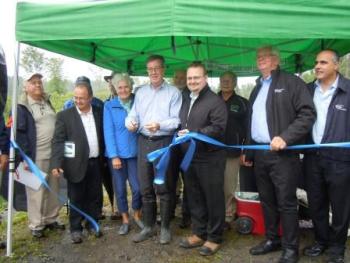 South Nation Conservation (SNC) has acquired another parcel of forested land to add to the inventory of forests being protected within its 4,300 square-km jurisdiction.

The latest site consists of about 238 acres. It’s located at 5725 Garlandside Road, Ottawa, in the former Township of Cumberland. Adjacent to another SNC holding, the acquisition is a partnership between SNC, the City of Ottawa and the Ontario Heritage Trust (OHT).

Ottawa Mayor Jim Watson joined with SNC Chairman Doug Thompson and other dignitaries June 12 for a ribbon cutting commemorating the acquisition and opening of Cumberland Forest.

“The property is subject to a Heritage Conservation Easement Agreement between SNC and OHT to protect, maintain and restore the features,” said Saxon Ireland, SNC Property & Approvals Assistant. “Without the help of OHT and the city, purchase of this property wouldn’t have been possible.”

Ireland pointed out that forest cover is below minimum recommended levels across the SNC jurisdiction, and such cover is closely linked to ecological health.

There’s a total of 238 vascular plant species thriving on the site which Ireland described as “very high” considering uniformity of the habitat.

“It’s in very good ecological condition with three plant species observed that are regionally significant. There’s little in the way of invasive species other than a pocket of buckthorn which will be removed.”

Two bird species-at-risk were found, the Eastern Wood-Pewee and the Wood Thrush, with no special management plans required as the property already provides suitable habitat.

Mayor Watson spoke about the importance of forest cover in rural Ottawa.