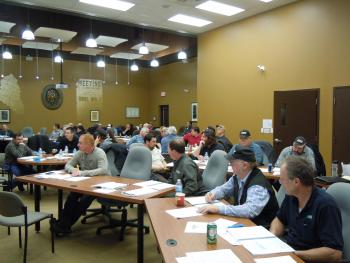 March 10, 2014 – South Nation Conservation held its annual information day for septic system contractors within much of its watershed recently and, as usual, there was an impressive turnout.

“There were 48 people in attendance,” said Monique Sauve, chief inspector for septic systems installed under SNC supervision. “There was a mixture of designers, installers, service and product providers, pumpers and engineers.”

Several topics in relation to the septic program were discussed, including online forms, permit applications, annual maintenance required under the Ontario Building Code, and general inspection procedures. In addition, a course was offered by the Canadian Onsite Wastewater Institute educating practitioners on Building Code changes.
“I was impressed with the level of interest and some of the questions asked,” Sauve said. “It’s clear that homeowners in the area are well served by the calibre of people in the septic business.”

This is the third year SNC will act as septic overseeing authority for 11 municipalities within the counties of Prescott, Russell, Stormont, and Dundas. Last year’s transactions were similar to 2012; in 2013, there were 311 septic permits issued, 62 approved system renovations, 199 severances, and 206 property searches.
SNC issues permits and services related to severance, land development, leach fields, certificates of approval and inspections of private sewage systems. Inspections are conducted year-round.