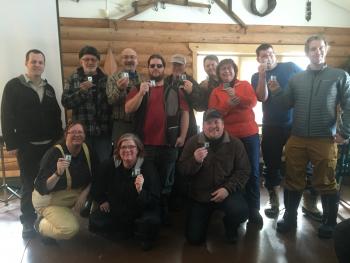 As part of the historical geo-passport, SNC and Geocachers of Eastern Ontario introduced a new collectable geocoin to mark the occasion; the coin features Grants Mills, the first milling location along the South Nation River dating back to 1801.

A Grants Mills geocoin will be presented to everyone who completes the 20-stop Historical Geo-Passport tour which will take participants across SNC’s 4,384 square-km jurisdiction searching out caches.

Geocaching is a networked technology-based scavenger hunt. Hidden caches are rated according to terrain and difficulty to locate.

Several years in the making, the successful collaboration between SNC and the Geocachers has been recognized in the past with other special coins. The latest project featuring historic sites warranted a new coin; financial support for the project was received through Great Lakes Guardian Community Fund.

The self-guided historical geocaching expedition comes with a bilingual booklet describing the locations where cashes are hidden. This marks the second time SNC and Geocachers have organized an official passport launch event.

“Geocaching promotes recreation, outdoor activity, and use of technology,” said Ian Mitchell, founder of Geocachers of Eastern Ontario and Chair of the SNC Communications Committee, noting that more than 1,600 geocaches are hidden throughout the SNC jurisdiction.

In addition to the recreational aspect, the Historical Geo-Passport also introduces participants to locations of special interest, giving them an opportunity to discover the history of this area, said SNC Communications Specialist John Mesman.

Full details and an electronic version of the booklet are available at: nation.on.ca/recreation/geocaching