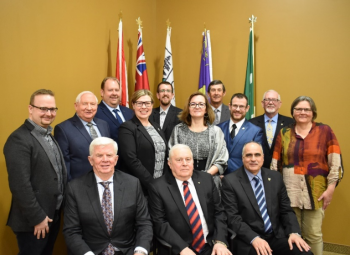 Bill Smirle, representing Stormont, Dundas and Glengarry, was elected the new Chair. George Darouze, Councillor for the City of Ottawa’s Osgoode Ward, was elected Vice-Chair and Doug Thompson was confirmed as Past Chair.

Composed of 13 members, SNC’s Board of Directors oversee the Authority’s budget, programs and services, and work alongside staff to champion local conservation initiatives.

The annual general meeting is always well attended by past and current elected officials and staff from partner municipalities. SNC’s 2018 Annual Report was presented at the annual meeting and highlighted achievements from the last year and ways in which the Conservation Authority worked with municipalities to engage communities to improve the environment.

A copy can be found online: www.nation.on.ca/resources/publications/annual-reports