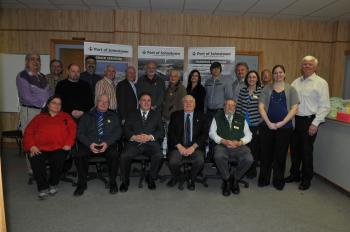 April 17, 2014 – Six years of collaboration by several stakeholders to complete $35 million in environmentally friendly renovations at the Port of Johnstown was celebrated at the port April 15.

SNC General Manager Dennis O’Grady said the integral involvement by Akwesasne “speaks to the development of a true community” where everyone potentially impacted by the project has a say in its design.

The role of former federal finance Minister Jim Flaherty in helping to secure stimulus funding to redevelop the port was publicly recognized by Leeds-Grenville MP Gord Brown. Cost of the work was covered in a three-way federal, provincial, municipal split.

Flaherty died of natural causes April 10. He had resigned from Cabinet less than a month earlier.

Pointing out the investment is generating private sector interest in the port and surrounding area, the MP said he’s looking forward to construction of final fisheries compensation projects under the supervision of SNC.

Started over the winter, the first compensation project included expansion of an existing Johnstown wetland into a larger habitat for fish and other aquatic life; it’ll be completed in June with planting of the shoreline.

Starting in August, a larger project will be undertaken on property owned by the St. Lawrence Parks Commission at Riverside Heights. Both projects were required by Fisheries and Oceans Canada to compensate for fish habitat lost due to installation of a new wharf at the port.

Although outside the port’s home municipality of Edwardsburgh Cardinal, Riverside Heights was seen by all parties as a logical location for additional habitat compensation. The project will involve creation of an embayment with channels cut into existing marshland.

SNC chairman Bill Smirle said he’s proud and pleased that all parties – not to mention St. Lawrence aquatic species - will gain from the compensation projects.