Hit Squad Members in a Community Near You! 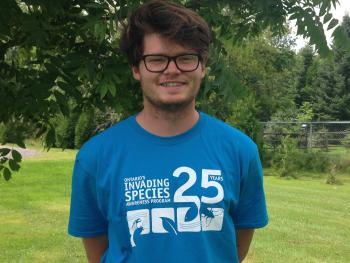 Media release courtesy of the Ontario Federation of Anglers and Hunters.

Be on the lookout for a Hit Squad member in a community near you this summer as the Invading Species Awareness Program has 30 students working at partner locations across the province to spread the word about invasive species. One member of the Squad is stationed at South Nation Conservation in Finch this summer.

Invasive species pose a growing threat to Ontario’s biodiversity and cause millions of dollars in damage annually. There are more invasive species in Ontario than anywhere else in Canada, so it’s important to have the Invading Species Awareness Program (ISAP) Hit Squad working across the province again this summer to spread awareness about the impacts invasive species are having on our environment, economy, and society.

“The Hit Squad is an important part of our outreach strategy as they are delivering community-based outreach on invasive species” says Sophie Monfette, OFAH Invading Species Awareness Program Coordinator. “Our team of students allows us to connect with communities on a more local scale to address issues relevant to each community – something that we would not be able to do without them”.

Over the course of the summer, the Hit Squad will be out at community events educating the public on how to identify and report invasive species. Students will also have the opportunity to monitor local rivers, waterways and forests, looking for invasive species such as zebra mussels, spiny water flea, round goby, giant hogweed, garlic mustard, and other invaders in their geographical area.  They are partnered with host organizations including Conservation Authorities, Provincial Parks, non-profit organizations, and the Ontario Ministry of Natural Resources and Forestry (MNRF) district offices that go as far north as Kenora and as far south as Windsor.  Funding is being provided by the federal government’s Canada Summer Jobs program.

The OFAH partners with the MNRF to deliver the Invading Species Awareness Program.  This program, which is celebrating its 25th anniversary in 2017, uses public education to prevent the introduction of new invasive species, and to stop the spread of those already here.

To report a sighting or for more information about invasive species, please contact the toll-free Invading Species Hotline at 1-800-563-7711, visit www.invadingspecies.com, or www.EDDMapS.org/Ontario.