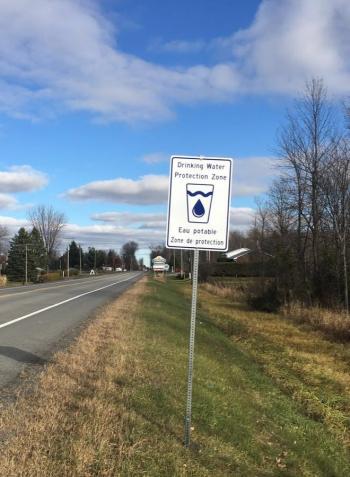 The signs are among initiatives arising from Source Water Protection efforts ongoing in the province for close to a decade. There are 19 Source Protection Committees (SPC) across Ontario which administer specific regions according to drainage systems.

Similar signs will be erected across the province. Costs will be covered by the Source Water Protection Municipal Implementation Fund.

Showing a water glass and droplet in blue on white, signs have been linked to vulnerable drinking water zones. It’s hoped passing motorists will pay heed and not take any action that could impact negatively on clean water supplies.

“The goal is to increase public awareness, as well as educate landowners on vulnerable areas and possible threats to drinking water,” said John Mesman, SNC Team Lead, Communications, adding that SNC and RRCA are partnering with member municipalities on highlighting the importance of protecting the Region’s clean water supplies.

Boater Awareness signs have also been placed at marinas in the jurisdiction, with that part of the project to ramp up next spring. In cooperation with marina owners, residents who enjoy power boating will be inundated with bilingual water protection signs.

Handouts invite boaters to take the “Clean Water Pledge”. In addition to avoiding overfilling fuel and dumping sewage, they’re asked to resist other obvious potential sins such as throwing trash overboard; instead, they should take advantage of shore-based containers.