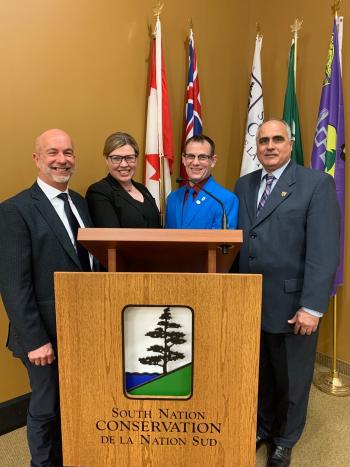 South Nation Conservation (SNC) offered a look back on 75 years of conservation during its Annual General Meeting (AGM) on April 21st, 2022: from the beginning in 1947 when the Authority was established to address concerns of poor land, water quality and forestry practices, to present day achievements that include improved floodplain mapping to help protect people and property from natural hazards and forest conservation efforts across Eastern Ontario.

Board Members appointed by SNC’s 16 member municipalities were also confirmed. Pierre Leroux, Mayor of Russell Township, was elected as the new Chair. Steve Densham, Councillor for North Stormont, was elected the new Vice-Chair, and George Darouze, Deputy Mayor and Councillor for the City of Ottawa’s Osgoode Ward was confirmed as Past Chair.

Composed of 13 members, SNC’s Board of Directors oversees the Authority’s budget, programs, and services, and works alongside staff to champion local conservation initiatives.

“I am grateful for the Board’s confidence and look forward to working with the organization over the next term as we remain focused on protecting people and property from natural hazards and guide sustainable development activities to help build resilient watershed communities,” said SNC Chairman Pierre Leroux. “I also want to thank outgoing Past-Chair Bill Smirle for his exemplary leadership and dedication to the Board, staff, and organization since 2011.”

“I thank our municipal partners for their continued support, and I look forward to working with the Board over the next year as the Authority celebrates 75 years of conservation,” said SNC Vice-Chairman Steve Densham. “The Conservation Authority plays an integral role in protecting the environment and supporting our communities and I’m looking forward to the work ahead.”

“The value of SNC’s environmental programs and landowner stewardship services, and support for municipal planning is of tremendous value to the City of Ottawa and all member municipalities,” said SNC Past-Chairman George Darouze. “I thank all members and staff for their support during my time as Chair and I thank our partners for their trust in the Conservation Authority as we look for new opportunities to protect and enhance our local environment.”

“We adapted to the needs of our member municipalities and residents to deliver a record-breaking year in development reviews, environmental protection, and providing outdoor natural spaces, and we are proud to highlight some of this great work in our Annual Report” said Angela Coleman, SNC’s General Manager and Secretary-Treasurer.

The AGM was live streamed online and is available to watch on the Conservation Authority’s public YouTube channel at www.youtube.com/SouthNationCA.

The Annual Report can be found at: www.nation.on.ca/resources/publications/annual-reports.