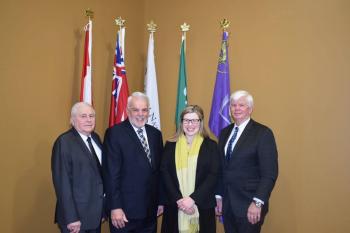 A new executive team was elected after Francois St-Amour, Mayor of Nation Municipality and Warden of the United Counties of Prescott-Russell did not seek re-election as Chair.

Fernand Dicaire, Mayor of the Township of Alfred-Plantagenet, was elected the new Chair. Bill Smirle, representing Stormont, Dundas and Glengarry, was elected Vice-Chair and Doug Thompson, representing the City of Ottawa, was confirmed as Past Chair.

The annual meeting is always well attended by past and current elected officials and staff from partner municipalities. This year’s crowd was also joined by MPP Jim McDonnell

The meeting included several presentations on past and current projects, including the million-dollar federal investment in new watershed modelling technology and new weather and environmental monitoring stations installed throughout the region to improve SNC’s Flood Forecasting and Warning program.

The event also launched a new video which promotes SNC’s various programs and services and highlight some of SNC’s work in the community. Video narration by John Mesman, SNC’s Communications Lead. The video is now available online: http://bit.ly/2ph4uVA.